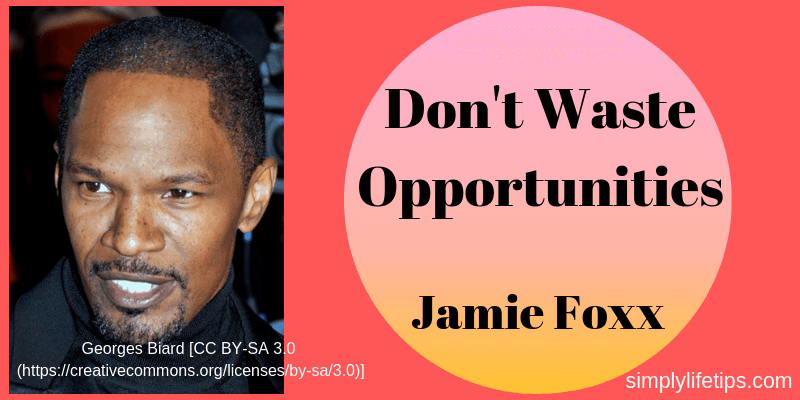 If you wait to see the sunrise, you will surely miss the chance to see the beauty of the sunrise. Time is precious. Time wasted will never get back. Wasting opportunities means wasting time.

Dictionary meaning of Opportunity – A time or set of circumstances that makes it possible to do something.

We all have great expectations in life. Most times, it is easy to meet expectations, knowing what you will get. Sometimes, you achieve much more than your expectations.

Some people ignore or miss opportunities. Some are fearful about failures or wait for another better opportunity. Failures are part of life. If you read the stories of successful persons, you can find they have struggled a lot, but moved forward fearless of failures. Also, they never wasted opportunities.

But later they feel sorry about wasting the opportunity. What is the benefit? Nothing, but mental stress only. After that, they look for ways to overcome stress.

Shortly after his birth, he was adopted and raised by his mother’s adoptive parents.

He was raised in the black quarter of Terrell, which at the time was a racially segregated community.

Foxx has often acknowledged his grandmother’s influence on his life as one of the greatest reasons for his success.

Began playing the piano when he was five years old.

He first told jokes at a comedy club’s open mic night in 1989.

Won an Oscar for his portrayal of Ray Charles in the 2004 biographical film Ray.

Foxx is also a Grammy Award-winning musician, producing four albums which have charted in the top ten of the US Billboard 200.

Also starred in the sketch comedy show In Living Color.

In 2012, Foxx starred in the title role of the Quentin Tarantino written and directed Django Unchained.

There is no meaning in feeling sad about missed opportunities. Try to make use of every opportunity.

These people never missed their opportunities and became successful. You may like to read their success story.

Do you ignore opportunities?